Twitter Facebook
← What are you doing on Tuesday & Wednesday Night?
What is the proper pour for wine? →

Did you miss it…do you know what it is?

It has just come & gone… Italian Carnevale; – in the United States, 2013, it was a celebration held around February 9-12 (Lent started on the 13th).  In Venice, however, celebrations went on from February 1-14, it some parts of Italy the parties started in the end of January!

Carnevale began in Venice during the Italian Renaissance as an annual celebration preceding Lent; the Italian Renaissance began in the the 14th century & lasted until the 16th century! Did you miss out on the fun?  Well, you don’t have to… come join us for the Taste of Rio Rancho, Saturday March 9 beginning at 4pm in the Santa Ana Star Center Arena; where we will bring back a touch of Italian Carnevale.  In addition, there will be over 25 other participating Rio Rancho Restaurants, live music & more… in an all new spacious layout!  Tickets (that include all the tasty food samples & live music) can be purchased in advance at  Santa Ana Star Center Box Office for $5 or you can pay $10 at the door the day of the event (if we aren’t already sold out)!  So, come join us in the fun & celebration of so much that Rio Rancho has to offer! 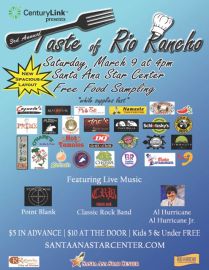 Best Italian Restaurant Albuquerque 2013, Best Pasta 2013 & Best Dessert: Tiramisu; as voted on in Albuquerque the Magazine, The Weekly Alibi & Best of Taste of Rio Rancho 2014... Top 5 Italian Restaurant Best of Albuquerque 2014 & 2015 - Best Rio Rancho Restaurant 2015 Alibi; Serving Rio Rancho & Albuquerque, New Mexico area for over 15 years & reviewed as one of the Best Restaurants in New Mexico; Joe's Pasta House proudly shares with you the traditional Italian American cuisine created with immigration recipes taught to Joe while growing up in his grandmother's kitchen. Working in the family bakery, Joe also learned the pastry trade from his father; but his heart remained in grandma's kitchen. Starting out in the restaurant business as dishwasher; Joe worked his way up. After working with many chefs, he started his first business with Dagwood's Restaurant following with Avanti's Pizzeria & Dakota's Catering. Kassie (KC - Joe's wife) started out as server in her teens, working her way up to food & beverage management by her early 20's; both in restaurants & catering. Together Joe & Kassie Guzzardi team up to serve you with over 60 years combined restaurant & catering experience. Whether you choose us for lunch, dinner, take-out, private meeting/banquet room, pick-up or custom catering; it is our joy & pleasure to serve you.
View all posts by Joe's Pasta House »
← What are you doing on Tuesday & Wednesday Night?
What is the proper pour for wine? →

Thank you for sharing your comments with us Cancel reply